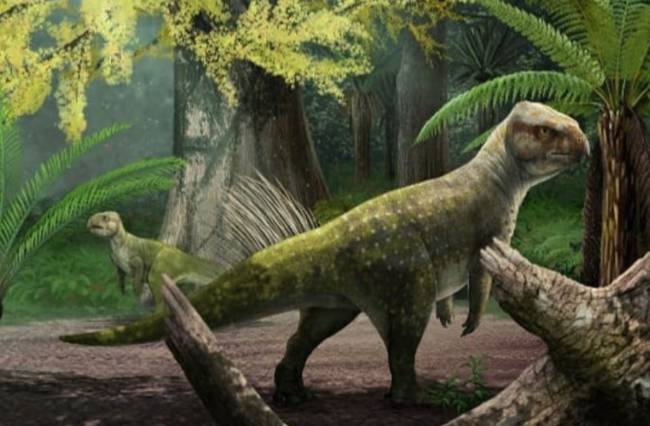 Some dinosaurs were adorable as a newborn puppy or kitten (although a lot of it has to do with how these adorable dinosaurs have been rendered by modern “paleo-artists”).

Discover 10 real-life dinosaurs cute enough to grace the cover of a Jurassic Hallmark card. If your teeth are starting to hurt from all these sweets, check out our list of the ugliest dinosaurs.

Despite its small size (only three feet long from head to tail and 20-30 pounds), the tuft-tailed, two-legged Chaoyangsaurus was a distant ancestor of dinosaurs like Triceratops and Pentaceratops.

Several paleontologists believe Chaoyangsaurus could have swum (which explains that structure on the back of its tail), similar to many other ‘basal’ ceratopsians of the late Jurassic and early Cretaceous periods.

Europasaurus was the smallest sauropod ever found, weighing only 1,000 to 2,000 pounds, making it the runt of the litter compared to Brachiosaurus and Apatosaurus, which weighed 20 or 30 tons each. Is there a reason why Europasaurus was so small and adorable?

There is no doubt that Gigantoraptor is one of those dinosaurs whose cuteness is directly proportional to the tastes of the artist who illustrates it. Gigantoraptor was not technically a raptor, but it may have had long, tufted feathers (cute) or gnarly, abrasive bristles (not so cute).

Gigantoraptor’s cuteness also depends on whether this two-ton Oviraptor relative ate small mammals or vegetarianism. There is no doubt that it was one of the biggest feathered dinosaurs of the Mesozoic Era.

As adorable as its name is, Leaellynasaura was a human-sized ornithopod of the middle Cretaceous. One of the most “awwww”-inducing qualities of this dinosaur was its large eyes, an adaptation to the darkness into which it lived for much of the year.

In addition, Leaellynasaura was named after an 8-year-old girl, the daughter of Australian paleontologist Patricia Vickers-Rich.

The gentle Ferdinand was to other bulls what Limusaurus was to other meat-eating dinosaurs. This Asian dinosaur probably wasn’t invited to many football games by its bigger, scarier relatives like Yangchuanosaurus and Szhechuanosaurus, which had long, tapered, toothless snouts.

There is an image of Limusaurus, a meek, 75-pound dinosaur eating dandelions and ignoring its theropod cousins’ taunts.

Mei (Chinese for “sound asleep”) was an early Cretaceous feathered theropod closely related to Troodon. Mei’s single fossil specimen was found curled up in a ball, its tail wrapped around its body and head tucked underneath its arm.

This will tug on your heartstrings. About 140 million years ago, a sudden sandstorm buried this sleeping hatchling alive (and not so adorably).

From the shortest dinosaur name (Mei, previous slide) to the longest, there is no diminution in cuteness. The name Micropachycephalosaurus means “tiny thick-headed lizard,” and that’s exactly what this dinosaur was—a five-pound pachycephalosaur that roamed late Cretaceous Asia.

Wouldn’t it be cute if two Micropachycephalosaurus males headbutted each other for dominance?

There’s no connection between its name and Mini-Me, Dr. Evil’s tiny doppelganger in the Austin Powers movies. Minmi was a wee ankylosaur, measuring only about 10 feet long and weighing 500 to 1,000 pounds.

Compared to most armored dinosaurs, this Australian dinosaur had a smaller brain than most of its breed. Since ankylosaurs weren’t exactly the brightest dinosaurs, Minmi was the Cretaceous equivalent of Baby Huey.

Though its close cousin, Therizinosaurus, gets all the attention, Nothronychus earns cuteness points for its genial, shaggy appearance (long claws, narrow snout, and prominent pot belly) and presumed herbivorous diet.

Nothronychus is also the first therizinosaur to be identified outside Asia; perhaps bigger North American dinosaurs visited Mongolia 80 million years ago and brought it home.

As one of the first prosauropods, Unaysaurus was a bipedal, plant-eating dinosaur that lived tens of millions of years before sauropods and titanosaurs.

Despite being smaller than most prosauropods that followed it (only eight feet long and 200 pounds), Unaysaurus was gentle and inoffensive enough to get its own TV show, if TVs existed in the late Triassic.