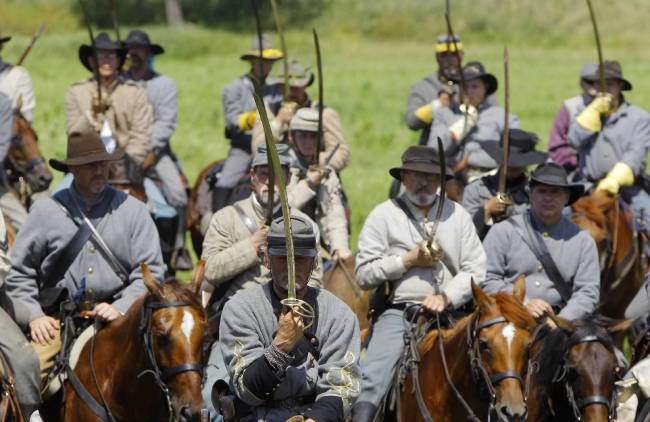 There have been some claims over the years that the Morrill Tariff, passed in early 1861, caused the American Civil War. It was said that this law, which taxed imports into the United States, was so unfair to southern states that they seceded.

There is, of course, controversy surrounding this interpretation of history. During the decade preceding the Civil War, enslavement had become the dominant political issue in America.

The Morrill Tariff was not the “real cause” of the Civil War, as is commonly believed.

People who claim a tariff caused the war seem to be trying to obscure, if not ignore, the fact that enslavement was the central issue during the secession crisis in late 1860 and early 1861. Enslavement was a prominent topic of discussion in newspapers published in America during the 1850s.

Enslavement tensions in America had certainly not been an obscure or side issue.

There was, however, a Morrill Tariff. The law was controversial when it was passed in 1861. Americans in the southern states and British business owners who traded with them were outraged.

During the secession debates in the south just before the Civil War, the tariff was discussed at times. However, it would be a huge stretch to claim that the tarriff provoked the war.

What Was the Morrill Tariff?

Morrill Tariff was passed by Congress in 1861 and signed into law by President James Buchanan on March 2, two days before Buchanan left office and Abraham Lincoln took office. In addition to raising rates, the new law changed the way duties were assessed on goods entering the country.

Justin Smith Morrill, a congressman from Vermont, had written and sponsored the new tariff. According to widespread belief, the new law favored industries in the northeast and penalized the southern states, which imported more goods from Europe.

The new tariff was strongly opposed by southern states. In addition, the Morrill Tariff was particularly unpopular in England, which imported cotton from the American South and exported goods to the United States.

Tariffs were not a new concept. Throughout the early 19th century, a series of tariffs had been enacted by the United States government.

There was also no new anger over a tariff in the South. In the South, the Nullification Crisis was sparked by the notorious Tariff of Abominations decades earlier.

Lincoln and the Morrill Tariff

Lincoln has sometimes been blamed for the Morill Tariff. The idea does not hold up to scrutiny.

Abraham Lincoln, as the Republican candidate, supported the idea of a new protectionist tariff during the election campaign of 1860. In some states, most notably Pennsylvania, where factory workers in various industries benefited from the tariff, it was an important issue. Tariffs were not a major issue during the election, which was dominated by enslavement, the big issue of the time.

Because of the tariff’s popularity in Pennsylvania, President Buchanan, a native of the state, signed it into law. Despite being called a “doughface,” a northerner who frequently supported policies that favored the South, Buchanan supported the Morrill Tariff on behalf of his home state.

Furthermore, Lincoln was not even in public office when Congress passed the Morrill Tariff and President Buchanan signed it into law. Despite the fact that the law went into effect early in Lincoln’s term, it would be illogical to claim Lincoln created it to punish the South.

There is a historical myth that circulates at times on the internet that Fort Sumter in Charleston Harbor, the spot where the Civil War began, was really a “tax collection fort.” As a result of the Morrill Tariff, the pro-slavery states launched their rebellion in April 1861.

In the first place, Fort Sumter had nothing to do with tax collection. It was built for coastal defense following the War of 1812, a conflict in which Washington, D.C., was burned and Baltimore was shelled. Fort Sumter was built in 1829 without any mention of tariffs, as part of a series of forts commissioned to protect major ports.

Fort Sumter’s conflict, which culminated in April 1861, actually began in December, months before the Morrill Tariff was enacted.

After Christmas 1860, the commander of the federal garrison in Charleston moved his troops to Fort Sumter in response to the secessionist fever that had overtaken the city. At that point, the fort was essentially deserted. In no way was it a “tax collection fort.”

Did the Tariff Cause the Pro-Slavery States to Secede?

During the secession convention in Georgia in November 1860, mentions of the “Morrill bill,” as the tariff was known before it became law, appeared. However, mentions of the proposed tariff law were peripheral to the much larger issue of enslavement and Lincoln’s election.

During the period between December 1860 and February 1861, seven states that would form the Confederacy seceded from the Union. Fort Sumter was attacked in April 1861, leading to the seceding of four more states.

There is mention of tariffs and taxes within the various declarations of secession, but it would be a stretch to say that tariffs, and specifically the Morrill Tariff, were the “real cause” of the Civil War.