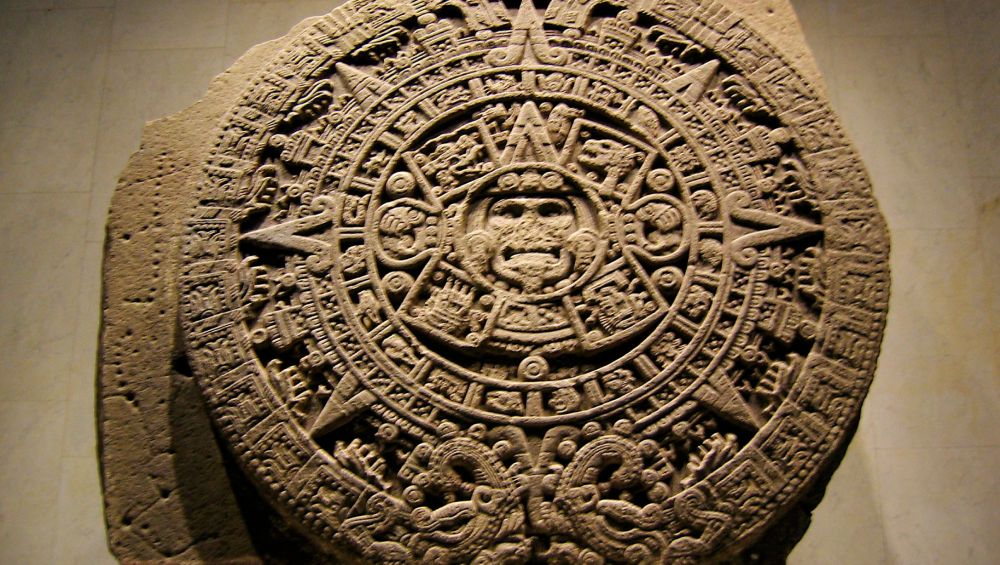 Tonatiuh (pronounced Toh-nah-tee-uh and meaning ‘He who goes forth shining’) was the name of the Aztec sun god and patron of all Aztec warriors, especially the jaguar and eagle warrior orders.

Tonatiuh derives its etymology from the Aztec verb “tona,” which means to shimmer, to shine, or to emit light. Scholars take the Aztec word for gold (“cuztic teocuitlatl”) to refer directly to the excretions of the solar deity.

Aztec sun deities had both positive and negative aspects. The Aztec people (Mexica) and other living beings received warmth and fertility from Tonatiuh. But he would need sacrificial victims in order to accomplish this.

The role of Tonatiuh as high creator god was shared with Ometeotl in some sources; however, while Ometeotl represented the benign, fertility-related aspects of creation, Tonatiuh represented the militaristic and sacrificial aspects. Warriors were his patrons, who sacrificed prisoners at one of several shrines throughout the empire, fulfilling their duty to the god.

As part of the Aztec creation myth, Tonatiuh demanded sacrifices. According to the myth, the sun appeared in heaven for the first time after the world had been dark for many years, but it refused to move. To propel the sun on its daily course, the dwellers had to sacrifice themselves and supply the sun with their hearts.

During the era of the Fifth Sun, Tonatiuh governed the Aztecs. As per Aztec mythology, the world passed through four ages called Suns. Tezcatlipoca ruled the first era, or Sun, followed by Quetzalcoatl, Tlaloc ruled the second, and Chalchiuhtlicue ruled the third. The current era, or fifth sun, was ruled by Tonatiuh. During this age, the earth was characterized by maize eaters, and no matter what else happened, an earthquake would violently end the world.

Known as Huey Teocalli in Aztec, hearts were torn out of war captives’ chests as a ritual sacrifice to the heavenly fire. To keep the world going, the Aztecs waged war to capture sacrificial victims, especially Tlaxcallan, to initiate night and day and rainy and dry seasons.

“Water-burned fields” (atl tlachinolli), “sacred war” or “flowery war” were names given to the war to gain sacrifices. The conflict consisted of mock battles between Aztecs and Tlaxcallans, in which the combatants were not killed in battle, but rather captured and sacrificed as prisoners. Participants in these wars were known as Tonatiuh Itlatocan or “men of the sun”; they were members of the Quauhcalli or “Eagle House”.

In the few surviving Aztec codexes, Tonatiuh is shown wearing a blond wig, circular dangling earrings, and a nose bar with jewel-tipped tips. Often depicted in the codexes as grasping human hearts with its claws, he wears a yellow headband decorated with jade rings. In many illustrations of Tonatiuh, his head is placed directly in the center of the solar disk. On Tonatiuh’s face, two different shades of red are painted in vertical bars in the Borgia Codex.

The image of Tonatiuh on the stone of Axayacatl, the famous Aztec calendar stone or more properly the Sun Stone, is one of the most famous images of him. Tonatiuh’s face is the symbol of the current Aztec world, the Fifth Sun, and the symbols surrounding it are the calendric signs of the past four eras. On the stone, a sacrificial knife made of flint or obsidian protrudes from Tonatiuh’s tongue.